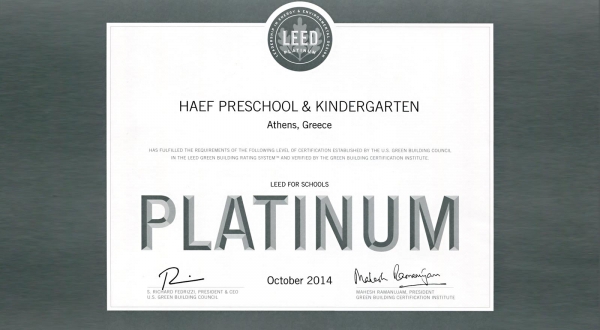 The new Kindergarten –located at Psychico, an Athens suburb– has 284 students, offering them a top-quality bilingual (Greek-English) program.

The high standards of its academic-pedagogical infrastructure and services are matched by outstanding architectural and structural characteristics, combining aesthetic and functional excellence with exemplary sustainability.

The Kindergarten's exposed roof is covered with turf which provides a seamless integration of the new building to the environment, thus enhancing local biodiversity. Rainwater harvesting was introduced as a sustainable solution to reducing potable water demand for irrigation of the extensive landscape. The building's design, which allows ample daylight penetration in all regularly occupied areas, eliminates lighting loads and creates a high-quality indoor environment.

Recently HAEF's Kindergarten was certified with the Platinum LEED (Leadership in Energy & Environmental Design). It is the first Platinum LEED awarded to an architectural project in Greece. It is also the first Kindergarten building in the world outside the United States to have received this top distinction granted by the U.S. Green Building Council. Accordingly this project has become a showcase in sustainable design and construction.

The architectural design and supervision of the Kindergarten's construction is the pro bono work of Alexandros C. Samaras & Associates-Architects offered to the non-profit HAEF.